So, Chicago's lacking in tech leadership, says a columnist in the Chicago Tribune.  No, it's not, respond the heads of various tech organizations in Chicago and the State.  As someone who's founded a startup here in Chicago, I'm certainly more inclined to agree with the Trib columnist than with the panel.  However, I'm also a policy wonk - so I decided to take a look at the data to see who's right.

After examining the data, it is clear that the leadership at DCEO, the ITA, World Business Chicago, IBio, the NanoBusiness Alliance, and the ISTC has failed.  While the organizations that signed the rebuttal may do many things, as they list in their bullet points, it is clear that the outcomes one would find from successful leadership just are not there.  What they're doing is not working, and there are no signs of improvement in Illinois' technology competitiveness, no matter how you slice the data.
The best independent, objective data I could think of was venture funding data for startup companies[1].  The assumption, of course, is that venture funding is very highly correlated with technology leadership and serves as a legitimate proxy.  The focus on startups is because organizational leadership can most help the smallest of companies and early entrepreneurs as they jump into the deep end.  (However, I've presented the overall data as well to avoid charges of bias.)  Employment figures are fuzzy - you probably don't want to include CDW salespeople in a list of technology employees, for example.  I gathered state-by-state data from PricewaterhouseCooper's MoneyTree Report.  My source of data was the State Science and Technology Institute (SSTI).  SSTI's Venture Capital data site further breaks down the MoneyTree into easy-to-use state-by-state data[2].

You can see the data for Illinois at the SSTI page for Illinois.  The data show that Illinois companies have raised roughly $440 million per year since the last bubble year of 2000, which sounds decent, until you realize that Illinois companies only attract, on average, 1.59% of all VC dollars - across all stages - raised in the US.  The average number of Illinois VC funding deals per year for the 2001-2008 period is 70.5, which is just 1.99% of all deals in the States.  (Here's the page for the US data.)
These numbers aren't any prettier for Illinois startup companies.  For the 2001-2007 period (there is no by-stage data for 2008 available on the SSTI state-by-state breakdown pages), Illinois startups raised a total of just $56.7 million, a pittance of just $8.1 million per year.  It's even worse on the per-deal statistics: Illinois had a total of just 32 startup fundings for the entire seven-year 2001-2007 period.  That's an average of just 4.6 startup fundings per year.  The total startup funding across the entire US for the 2001-2007 period was $5.6 billion, with a total of 1,845 deals over the seven-year span.  That's an average amount of $740 million per year and average number of 264 startup fundings per annum across the entire United States.
That means that Illinois companies, on average over the seven years, raised just 1.74% of the seed money and did just 1.09% of the startup deals done nationwide.  This, despite the fact that Illinois has 4.24% of the US population.  For just the smallest startups that organizations like DCEO and the ITA should be helping the most, Illinois is getting less than half of the dollars and doing less than a third of the deals that you would expect for a state of its size.  (It's still less than half for dollars and deals overall, as well.)

The numbers are just as embarrassing when you look at Illinois relative to the other states in the nation rather than just the United States as a whole:
(Slide 4)
(Slide 2)

Illinois ranks an average of 16th among the 50 states, DC, and Puerto Rico in startup dollars for the 2001-2007 time period.  Illinois did a bit better and averaged a rank of 13th in startup funding deals for the period. (Illinois' median for dollars was 14th and its median for deals was 11th.)
However, again, these figures favor the larger states over the smaller states; i.e. you'd expect California to be the leader in both categories (and it was) since California has the most people.  To really compare, we must look at the states on an apples-to-apples basis by looking at the per capita figures:
(Slide 3)
(Slide 1)

It turns out that the per-capita figures are even worse for Illinois than the non-normalized figures.  Illinois averaged just 20th amongst the 50 states, DC, and Puerto Rico in startup dollars per capita for the 2001-2007 period.  Illinois averaged a pitiful 23rd in startup deals per capita for the 2001-2007 period.  (Illinois' median for per-capita dollars was 18th and its median for per-capita deals was 24th.)
States that consistently beat Illinois in the rankings include Colorado, Texas, and Washington, to say nothing of California and Massachusetts.  However, even states like Maryland and Pennsylvania consistently beat Illinois' rankings on all four measures - startup dollars, startup deals, startup dollars per capita, and startup deals per capita - year after year after year.  On a per-capita basis, states like Connecticut and even New Mexico consistently outrank Illinois in dollars and deals.
By the way, Illinois' average rank in dollars for 2001-2008 (remember, SSTI has total figures for the 2008 year) - regardless of stage - was 13th, and its rank in deals was also 13th.  Again, the average per-capita rankings - the better apples-to-apples comparison - was much worse.  Illinois' average per-capita rank in dollars raised for the 2001-2008 period was 22nd, and its per-capita rank for deals done (again, for all VC deals regardless of stage) was also 22nd, both barely over the median - a median artifically low due to states like Wyoming and Alaska that see no venture activity, year over year.  Illinois is actually below the median when you exclude the inactive states - shameful.

That's just not leadership.
The data are clear - our technology organizations have failed to do their jobs and changes need to be made to make Illinois more hospitable to technology startups if the state has any chance at competing in a 21st century economy.   Footnotes:[1] Let me be clear: I fully acknowledge that one can grow a startup without raising outside funds.  However, I believe that those are exception cases, not the rule.  More importantly, I believe the environment that allows for funding is also the best environment for a bootstrapped startup.  In other words, the plural of anecdote is not data.

[2] Data geeks: I fully acknowledge that the MoneyTree data excludes deals done solely by individual investors (angels); however, 1) this is the best objective data I could find and 2) my guess is that individual investors would only further demonstrate the conclusions I'm about to make.  Feel free to grab your own source MoneyTree data and run it yourself.  I couldn't find industry breakdowns by state, and I believe that the overall data is plenty clear about the conclusions to be drawn. 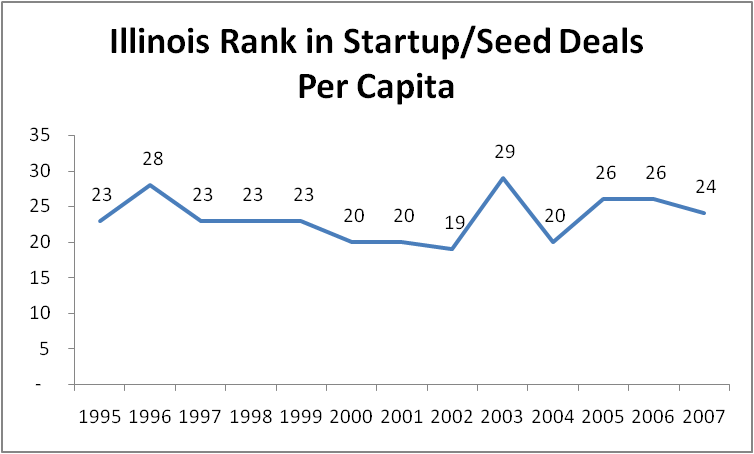